I Hawked a House to a Hooker

“The best time to reach me is early in the morning. I start work about noon,” she said.

“She’s a prostitute!” tsk, tsked the female agents who declined to work with Sylvia. She was my lender friend’s roommate in college.

Laura beseeched me, “Will you help her buy a house?”

“Money is money. Many people have prostituted themselves for dollars, though not quite so professionally. Who am I to judge how she earns hers? She’s probably saved marriages.” I replied.

“I resemble Michelle Pheiffer,” Sylvia coyly told the johns that called for her services. She was pretty, fit, fifty with freckles. She looked thirty. Plastic surgery is routine in her industry.

We discussed her ideal house. She often worked at home. “It should be easy access to the freeway, good for commuters, no Brady Bunch families, or snoopy neighbors.”

There was a house for sale across the street from the one she rented. The neighborhood was satisfactorily sleazy. “How about that one?” I asked.

“Perfect,” she said and we wrote up an offer.

The escrow was like her skin, smooth and wrinkle free. “I need a ten thousand dollar deposit.” I told her.

Laura helped her with financing. Exotic dancer was her official job description.   She didn’t have much in the way of income documentation.  It turns out, she was the highest paid hooker in the Silicon Valley area; Santa Cruz being the valley’s bedroom community…

She made a lot more money than Laura or I did. While Sylvia worked, we waited for inspectors and appraisers outside the house she was buying. Johns cruised by slowly, looking for her address. They gawked. We got a few long stares and one thumbs up. One particularly handsome man in a new burgundy Jaguar had Laura and me seriously considering new careers.

Sylvia came up with ten per cent of the purchase price in cash; got a loan for eighty percent. The seller was carrying back ten percent as a second on the property. Sylvia would make payments to him for a number of years until this loan was paid off. She offered to do a trade. Sub prime loans were never this creative.

Inspections were done. The house was in descent shape. The purchase loan was secured. At the sign off Sylvia whispered, “Thank you for being so respectful.” 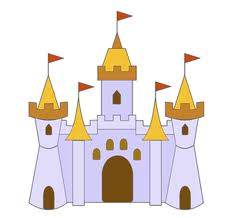 A man's home is his castle.

I was invited by Jack to view their home. He was an eighty-three year old mechanical engineer, former graduate of Stanford. He hoped the house he built fifty years ago was worth a million dollars. He called me because I was marketing a property in his respectable, middle class Santa Cruz neighborhood. I excitedly drove around, located his address and winced, “Oh dear.”

The property sloped down from the street. Gigantic oaks and various vines encircled the building preventing penetration of sunlight. Moss and ferns grew in abundance. The path to his door consisted of awkwardly placed stones. Even wearing flats I was concerned about twisting an ankle. It took awhile for him to answer the heavy, coffee colored, windowless, wood door complete with carved scenes of redwoods. Jack, a tall, thin, gray haired man finally appeared.

I entered an open-air courtyard that had been covered with a clear plastic, make shift roof. I was confronted with a wavy patterned, colorful tile mosaic floor and more rocks, big ones. He told me his wife wanted a rock garden so he made one for her. He exclaimed, “That one weighs two tons. Those two are a ton each.” There were about five or six of them. “Had to have a crane deposit them.” And, I thought, it’d take dynamite to remove them.

He spryly scrambled up a large boulder, must have been ten tons, indicating that I should follow him up to his office. It seemed to be suspended from the oak trees. There was a chain to grab onto and a rickety railing at the top. His office was a small room furnished with a massive desk, chair, couch and piles of papers everywhere. How did he get that stuff up there I wondered? Oh right, the crane. This room had a window with no blinds. A little light filtered through the tops of the oak trees.

Blueprints of two duplexes he had designed and built years before were tacked to one wall. He pointed out all of their unusual benefits to me in great detail, the floor plan with no windows on the street side, the back alley access. The first was made of wood. The second concrete, “Better,” he said. “It was a tilt up.” Probably used a crane I surmised.

Jack was friendly, charming, eccentric, probably a genius. He offered me a seat on the couch and asked with a gap-toothed smile, his bushy eyebrows lifted in a questioning arch, “Well, you think you can sell this place?” I blinked and managed a tight smile, Does he know, I thought, does he know?

I glanced around at the thick dust covered cobwebs dripping from the ceiling. I took a deep breath remembering the monolithic piece of granite that I needed to climb down to get to ground level, “Let’s take a look at the rest of the house.”

Nanny goat I am not. As I scooched, white-knuckled down the rock, he reassuringly chuckled, “Hold on to that chain. Haven’t lost any one yet.”

We passed what looked like a sunken room with tattered gold carpet. “Living room,” he waved. “Use it mostly for storage now. We had a lot of meetings in there, lot of people, lot of meetings.”

Beyond the living room was a dining room with an enormous dusty glass table with a tree root base, “Takes seven men to move that table top, seven men.”

A narrow hall to the left of the dining room led to a small, dark, curtained room. “Master bedroom,” he informed me. The master bath boasted red-orange tiles on the counter and shower. “My wife thought they were too bright but I like something that wakes me up in the morning.”

A second dusky hall led to another bathroom and two small, musty bedrooms. Risking as asthma attack, I pulled back a curtain exposing unruly grass, weeds and oxalis. I carefully let the cloth settle back into place.

We returned to the galley kitchen. I was afraid to look. We thankfully ignored it and ventured into what appeared to be the family room. An old box shaped TV was tuned to a news channel. The walls were lined with shelves holding boxes of movies, not DVDs, but VHSs, hundreds of them, maybe thousands. “They’re my wife’s” he explained.

“ She knows which ones are which?” I asked incredulously.

Most surfaces were covered with piles of unrecognizable stuff.  Spider spun tapestries, probably started when construction had first begun, decorated the walls and ceiling. I was reminded of Issa’s haiku, “Don’t worry spiders, I won’t destroy your house.”

I sat on something resembling a chair and nodded, “Your place is quite amazing.”

“We’re not selling,” he said. “My wife would kill me if she knew you were here. She’s seventy-nine, volunteering at the library today. She doesn’t want to move. We’re not ready to sell, but our daughter would like us to move to be closer to her. Maybe in a year or two. So you think you could sell this? What do you think it’s worth? Think we’d get a million?”

I thought to myself, lot value, four hundred thousand, minus demolition.  The structure wasn’t worth remodeling. It would be disastrous to try to market it while it sheltered them, their stuff and arachnid friends. Tough one. I circled my shoulders, “Not a million. Your house is distinctly different, unique. This will limit your market. Less than a million.”

Relocating is challenging for everyone. I couldn’t imagine them corralling stuff, much less move it; the glass top dining room table that needed seven men to carry it, the rock garden, movies, the mysterious items stored in the living room?  It would take years to sort, organize and pack their treasures.

“We’re not selling,” Jack said. “My wife would kill me. If we could get a million, I’d be tempted. We’re not ready to move, maybe in two or three years.” I thanked him for sharing his home with me, relieved that he didn’t want to sell. He walked me to the front door, pried it open, mentioning that he had to fix the lock. I smiled, nodded and stumbled up the scattered stone path to my car as Jack bounded back up the boulder to his office.